This should really be titled “Treatment Number 4…. Not!” as the treatment didn’t happen.

Barbara and I went up to London as usual by train, I was feeling a bit crap and was suffering from a hot sweat.

I wore my TFL “Offer me your seat” badge for the first time and it worked, 2 people offered me a seat which I was pleased to take. I was pleased to see that there were people out there who were so kind.

We arrived at the hospital just before 8 am and met with Danny the research nurse who gave me a blood form and some extra vials for blood there need for the trial.

Then it was off to the blood department where I was the first in the queue. Helen took my blood and did a good job too, a total of 10 vials were taken along with the trial blood.

Then back upstairs and back to Danny who took my blood pressure etc. 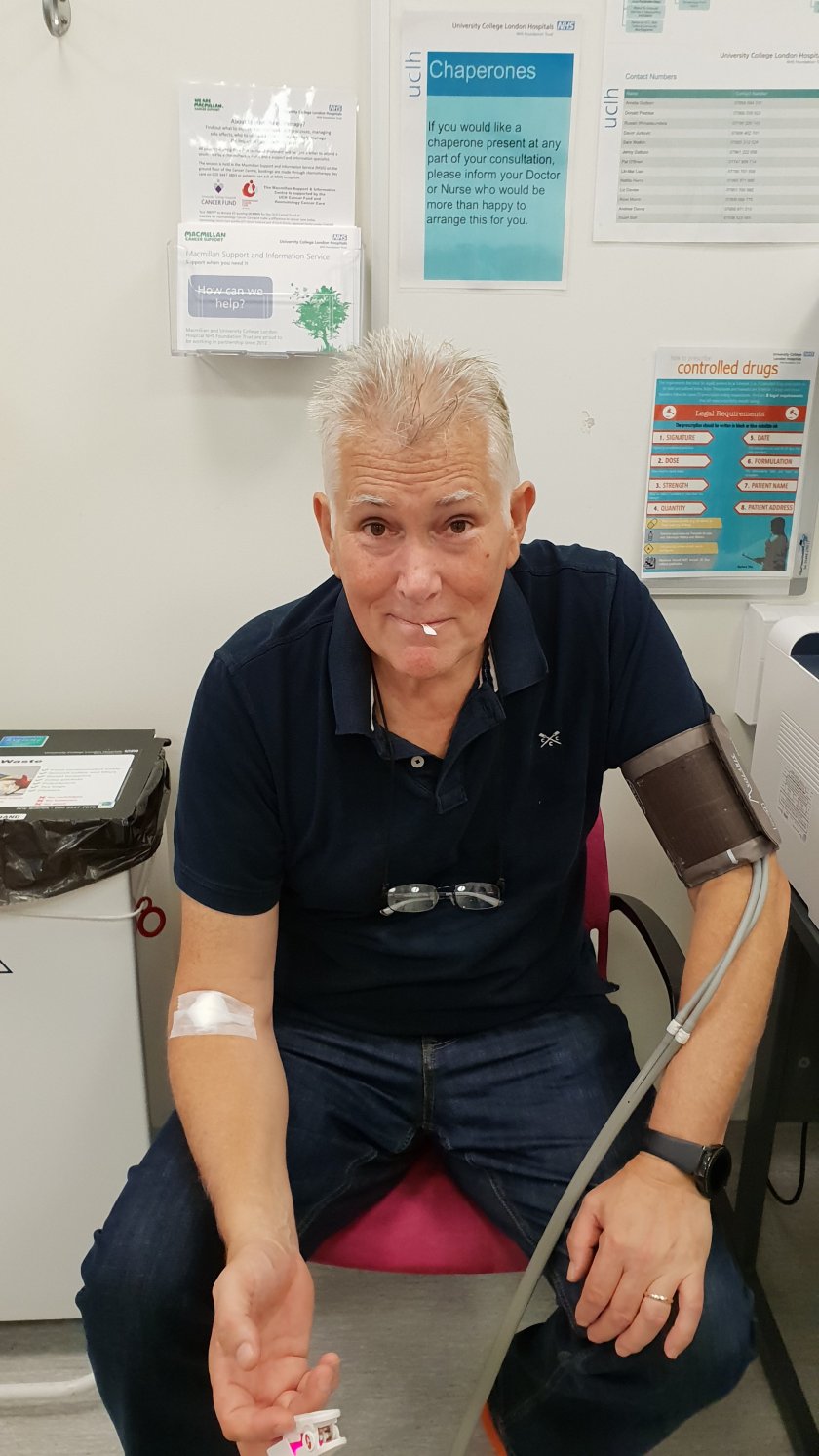 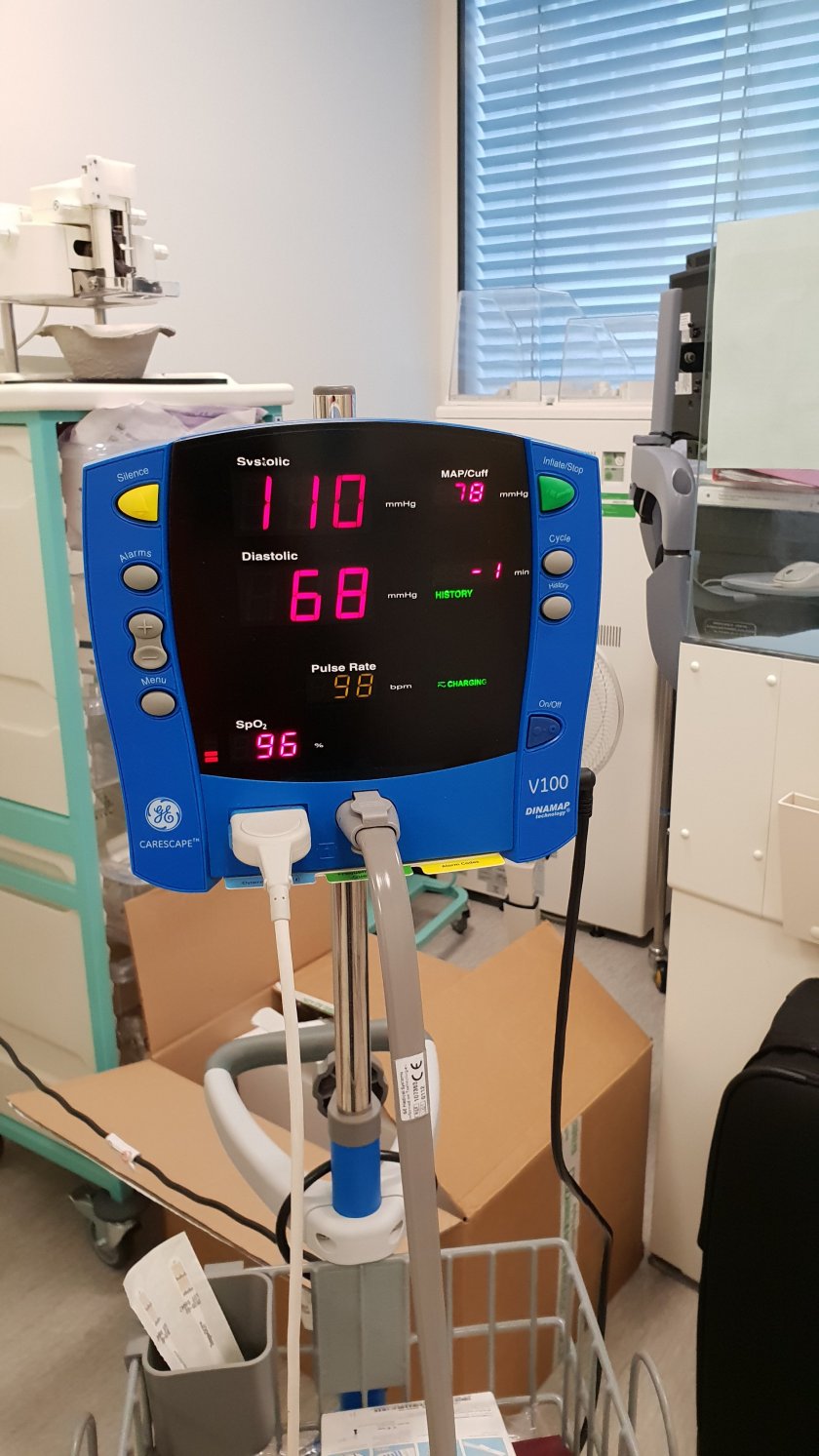 And then it was time to sit and wait for the doctor.

Dr Linch gave me an examination and asked me how I had been and what side effects I had experienced.

We spent about 20 minutes talking through things.

We also chatted about the scans I had done on the 30th and he said they looked OK. He said it is difficult to see any improvement with the bone scan as the bone activity would look the same if it was getting better, he could say it wasn’t getting worse which is good news.

The CT scan was a different story and showed that I had a small amount of fluid around my lungs, I believe he called it pericardial fluid but I need to wait for the full post clinic letter to come through to get the proper terms. However because of the fluid he asked about my breathing and whether I was getting breathless or having difficulty breathing, which I am not.

Also on the downside my PSA had risen to 14 from 11 a couple of weeks ago. He could not explain why this had gone up but did say that they didn’t really expect to start seeing improvements until after week 12 and while we are at 12 weeks since treatment started they have been delays in treatment. Hopefully next time we will start seeing imprements.

It was then agreed that we would go ahead with treatment 4 and off we went. Barbara and I headed to the main building and had breakfast, picked up a sandwich for lunch and then headed to the treatment suite where we would settle down and wait for my treatment.

Confusion started as soon as we arrived at the treatment suite, we were early but people were saying my treatment had been postponed by the doctor yet we had only seen him 45 minutes ago and it was all go for treatment.

After some investigation it looked like my blood results had come in and one of the markers was high and so it was recommended that I go down clinic and find out what had happened.

Back at clinic we bumped into Danny who said Dr Linch wanted to see me and just then Dr Linch arrived.

We then had another chat with Dr Linch who explained that one of my Liver enzyme markers (AST) was 7x higher than it should be and this could indicate minor liver damage and because of this treatment could not go ahead and this problem needed to be resolved.

I was prescribed some steroids, Prednisolone to be taken for 5 days to sort the liver out and then come back next week for another blood test and if its OK then treatment would be done then.

Dr Linch did say that it looked the immunotherapy was working and it seemed that the T Cells were being very active and they maybe targeting a minor infection in the liver.

Immunotherapy works on the T Cells ( A type of white blood cell that works as part of the immune system) and turns them into cancer destroying troopers.

But what these cells aren’t good at is target recognition and so they have been running amok destroying cancer cells and also having a go at my liver amongst other things.

So the plan now is to sort the liver out and go back next week and all being good go ahead with Treatment 4.

It is a bit of a roller-coaster ride with all this treatment on/treatment off, you get emotionally prepared for treatment and then it is cancelled. I think it is also made worse as the side effects have been bad and it takes some resolve to go on with treatment but if I am honest I am pleased to have another weeks break. I have been feeling rough for a few weeks now and just starting to feel myself so at least the delay gives me time to have some quality time and to build my strength more for the next treatment.